“The Press” in America is no longer an exclusive club of “professional” journalists. Today, in the age of camera-equipped cellphones, the Internet, blogs, and YouTube, “The Press” now consists of every literate adult who owns a PC, tablet, or smartphone. The 21st Century is in fact the era of Citizen Journalists. The key requisite qualification to be considered part of “The Press” is simply enfranchisement as a Citizen–thereby assuring you the full protection of the First Amendment.

Whenever you see or hear the words “legitimate journalist” or “qualified journalist”, beware! Those are phrases used by both politicians and guilds with vested interests. (Witness the recent debate over a proposed Federal Shield Law.)

What and Who We Are

The Constitution First Amendment Press Association (CFAPA.org) was founded in March, 2014 to provide credentials and to provide a venue for a mostly anonymous association of independent American Citizen Journalists. We providepress credentials free of charge to any adult American Citizen who accepts the Constitutional Journalist’s Pledge and who agrees to CFAPA’s Member Terms and Conditions.

The founders of the CFAPA organization were Robert Henry, Rawles (a home-schooled college student) and his father, James Wesley, Rawles. (A journalism school graduate and the founder of SurvivalBlog.com.) They are both strong advocates of a Free Press (including Citizen Journalism), as well as advocates for all of the other rights that are spelled out in and guaranteed by The Bill of Rights.

The CFAPA is not politically affiliated and has members from a broad range of religious, economic, ethnic, and political backgrounds. Our members all have just two things in common: we love our liberty, and we have a yearning to seek and herald the truth, via Citizen Journalism.

What We Are Not

The CFAPA is not a corporate marketing gimmick, a partisan political tool, leverage for social media, or an attempt to push any particular brand of religion. Nor are we an e-mail address vacuum or a web cookie-gobbling monster. We strive to keep our members anonymous, so we keep no e-mail lists, no cookies, and no lists of originating ISPs, computer MAC-IDs, or servers.None. Zero. Zip. Zilch. Nada. We have NO links to social media sites or other data-mining or intelligence-gathering schemes. We run no annoying pop-up advertising, and accept NO paid advertisements. (Although we do sell some merchandise, to cover our bandwidth, printing, legal, and web hosting expenses.) We are about as far away from the Mainstream Media as possible, and in fact we despise what the Mainstream Media has become in recent years. We don’t exist to entertain people. Rather, we want to inform people. We have just one focus: legitimizing Citizen Journalism, in our free exercise of a right that pre-dates the Constitution itself.

Case law on Internet Journalism and Citizen Journalism is still in its nascent stages. One of the first definitive cases was The Mortgage Specialists, Inc. v. Implode-Explode Heavy Industries, Inc.– a 2010 New Hampshire Supreme Court case in which Mortgage Specialists (a mortgage lender) sought to obtain the identity of an anonymous source who provided Implode-Explode Heavy Industries (Implode), a web site monitoring risky lenders, with a confidential document detailing Mortgage Specialists’ loan practices. Mortgage Specialists also sought to prohibit the republication of the document and learn the identity of an anonymous individual who allegedly defamed Mortgage Specialists on Implode’s web site. Mortgage Specialists disputed Implode’s status as a news organization, claiming that it should not be afforded the rights of a news organization under the First Amendment and Part I, Article 22 of the New Hampshire Constitution. The resulting court decision found that Internet news outlets should be treated like print media and be afforded the same rights long-recognized for traditional print, radio, and television journalists. (Similar Federal court decisions are expected in the next few years, once the requisite test cases arise.)

You Have The Right To Film in Public Places!

The right of journalists to cover events at public places is well established. There is a lot of case law to back up the rights of journalists.

A Decade From Now…

The long-term goal of CFAPA is to make citizen journalists so ubiquitous that public officials and police officers will stop asking us to see press credentials. But until they do so, we will stand with you, to help confirm your credibility as a citizen journalist.

If you want to avoid situations like those shown at the top of our Featured Videos page, then please take a few minutes to become a CFAPA member and print out your free credentials at home, in three quick steps:

2.) Next, read and accept CFAPA’s Member Terms and Conditions.

3.) Finally, download and insert your name and the date in the PDFs of your free credentials page, dashboard sign, hat tag, and press badge. You can then print them at home.

Again, for your privacy, we keep no records of Members!

Spread the word! Link To Us 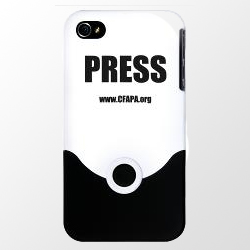